If you’ve watched the Attack on Titan anime, then you will most certainly have a few unanswered questions – what was the female Titan’s motive? Who are the Armoured and Colossal Titans? Attack on Titan: Wings of Freedom won’t answer these questions but instead allows you to reenact key moments from the anime, finishing at around volume eight of the Manga.

It’s great to see that the game has stuck with the Japanese audio and English subtitles rather than dubbing in English, although at times this can become troublesome. In the heat of battle I had no idea what my teammates were shouting at me – it sounded awesome though.

Entering combat will lock onto a Titan; the right stick selects a body part while X will fire in an anchor. Left stick allows you to move in any three-dimensional direction so you can position yourself so that you have a clear run at striking your target – preferably in the neck – that’s the Titan’s weak spot. Once into position, releasing the Left stick will make your character thrust forward to attack with a well timed strike. Movement is wonderfully simple and once the omni-movement clicks, you’ll soon be manoeuvring around Titans with the greatest of ease – Spider-Man eat your heart out. 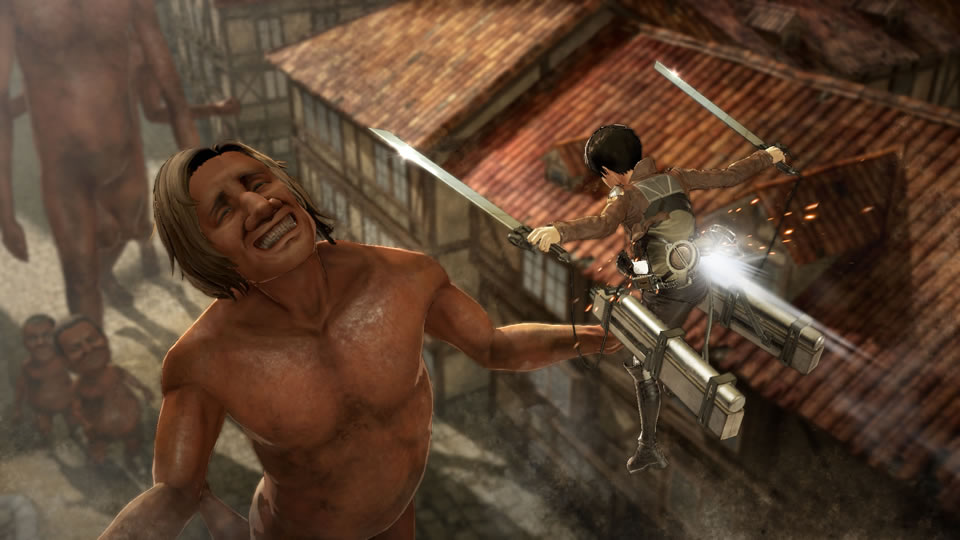 Without spoiling the story for those new to AoT, you also get to play as a Titan – the simple combat is satisfyingly brutal. Powerful attacks are wild but when you are as big as a Titan you needn’t worry about finesse. It’s great and has an immense wow factor for those who are familiar with the fiction.

Whether Titan or man, your greatest enemy is the camera. Crashing into the environment or preventing you from lining up a strike, the camera infuriates beyond belief. It can make the combat feel clumsy and that there’s more luck involved with hitting your target rather than precision. In fact, there’s a great deal of precision; targeting and chopping at Titans’ ankles and limbs before finishing them off with a slice to the naves off their necks rewards you with precious materials that can be used to upgrade your equipment, so it pays not to be too hasty in dispatching each Titan, and indeed well-planned and executed attacks facilitates this.

Levels are setup just like a Dynasty Warriors game. You can refill supplies at key points on the map, assisting other soldiers and have them join your team or help in the overall campaign by taking down dozens of Titans before facing a final, tougher enemy. This wrapped up in an AoT skin works extremely well but it can get repetitive. There is only so much Titan slaying you can do.

There’s also minimal danger to your character, meaning you can fly through the air and feel like the ultimate badass while felling Titan after Titan. However, fans will love the experience and newcomers might become so engrossed in the story, thanks to excellent pacing with attractive cutscenes throughout the campaign, that this might not be such an issue, but ultimately the combat never strays too far from target a limb and cut it off. At times Titans will also glitch into and over buildings, which makes them harder to lock onto and it looks kind of stupid. 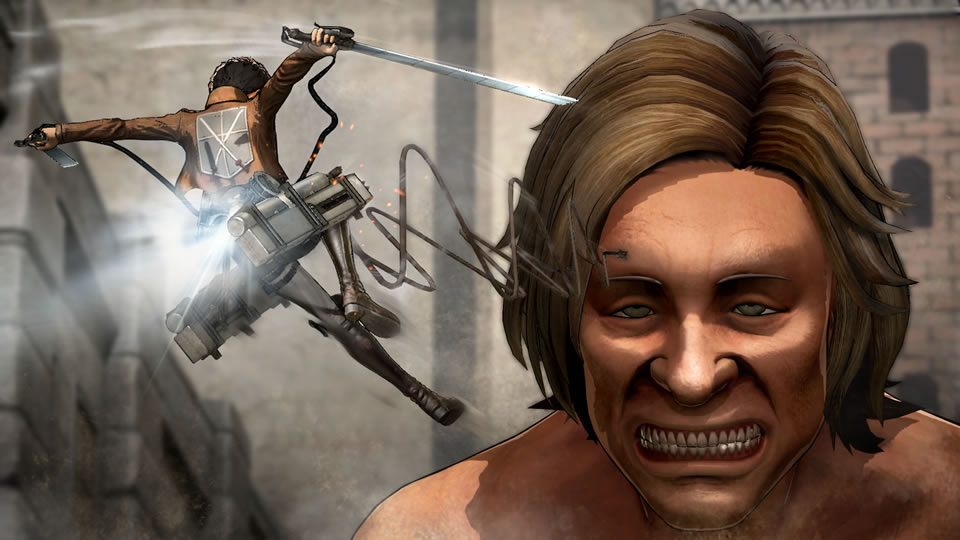 All the main characters from the series are present, most of whom you can interact with between missions at camp. Each playable character has different strengths, weaknesses and skills and is available at set points during the campaign. Once unlocked, they can also be selected in the game’s multiplayer Expedition mode, which places you on patrol duty, scouting the area and keeping the remaining walls safe from Titan attacks

Naturally there’s character progression. Levelling a character allows new skills to be learned and unlocks new equipment that can in turn be developed to make it stronger, faster and more efficient – playing through the Expedition mode is essential if you want to increase each character’s skill set.

Omega Force and Attack on Titan is a great mix. Bringing their Dynasty Warriors flair to the world dreamt up by Hajime Isayama, it’s the perfect combination. The game looks incredible, like it’s been lifted right out of the anime. The soundtrack is stunning with music to suit each situation – fitting both the style of the series while bringing that signature beat that Omega Force are renown for. The gore is spot on. The combat feels right and the movement of the Vertical Manoeuvring Equipment is splendid; Omega Force really has nailed the tone of the series.

Thanks to Xbox and KOEI TECMO for supporting TiX

Find us most evenings on Twitch!