When I was younger, there were few things as exciting as looking through all of the Mastertronic Commodore 64 tapes in a shop, where the cover art and game name was everything. Carefully making my selection, I’d get home, load the game up, and then press fire to begin. More often than not, the first play would end in disappointment; had I just spent my (not very) hard-earned pocket money on an impossibly difficult mess?

It’s not that Super Mutant Alien Assault (SMAA) looks like a C64 game, as it shares more of a resemblance with something you might have seen on the Amiga, but, that name and the design of the enemies just instantly conjure up what I might have held in my hand in the Bury St Edmunds Boots back in the mid-to-late-eighties.

Developer Chris Suffern’s game promises a ‘dance with death in a brutal and addictive arcade platformer shooter’. For me, going into any game that describes itself as ‘brutal’ normally results in wanting to turn and run as far away from it as possible, but the more time I spent with the game, the more genuine fun I started to have.

Based on the loosest premise possible (save humanity by shooting aliens), SMAA ranges from slight-mayhem to absolute mayhem. This is because each level is randomised; on one playthrough you might start in a level with a wealth of power ups (dodge abilities, guns, grenades, double-jump to name a few) and a health-vending machine, barely getting touched by an enemy, and on another you might be in a mad rush to race back and forth to different sides of the screen and shut down a generator with practically nothing to help you on the way. Going into a new level, there’s nothing to make you feel comfortable, and that’s part of the thrill. As you progress through the galaxies, you’ll unlock more level modes. However, as you progress, you’ll also unlock harder enemies, and from then on, they’ll then start appearing in your game from the very start. 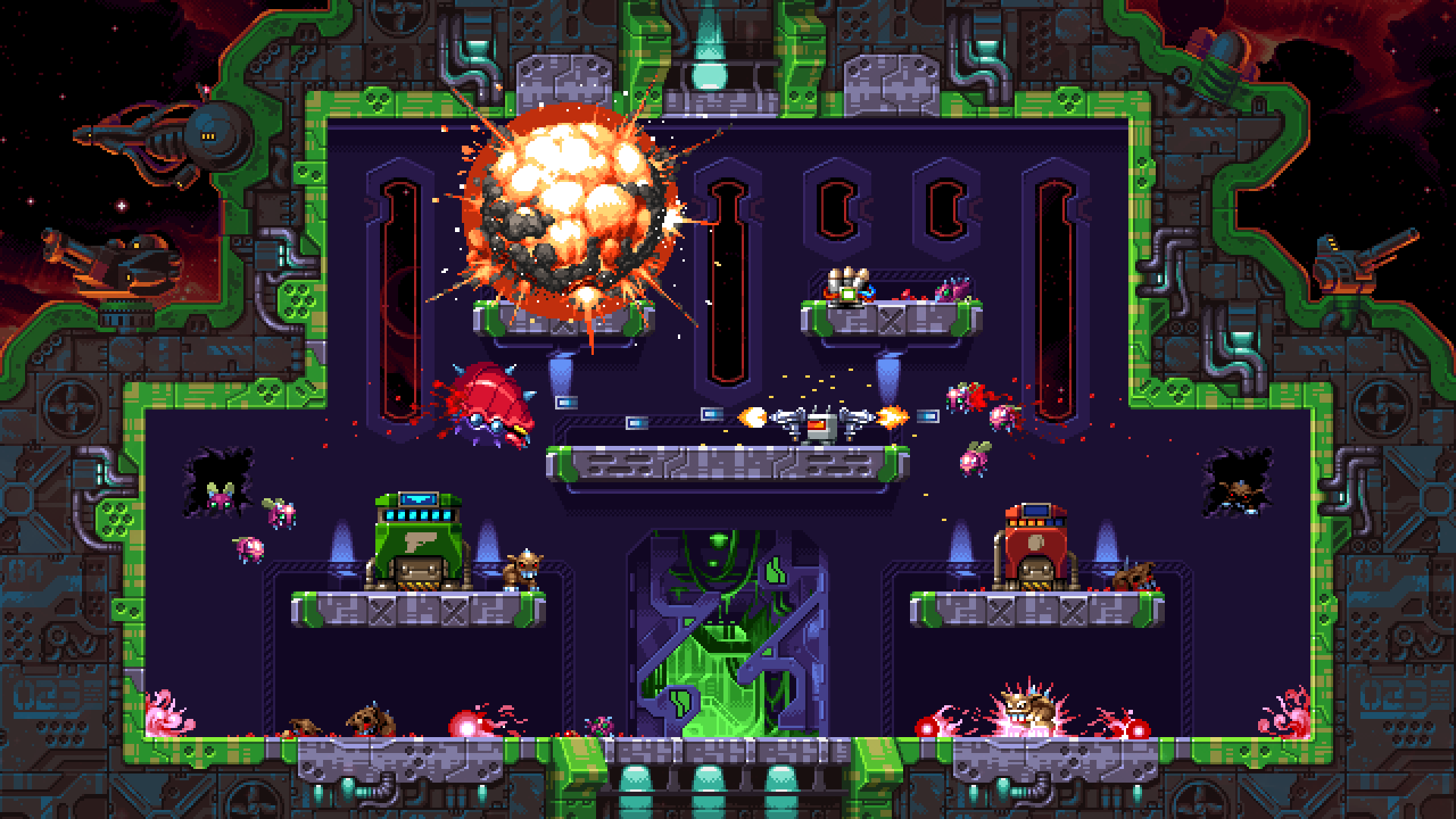 Scratch the surface a little more, and the more addicting SMAA becomes. As you clear a certain amount of levels in the game, you’ll start unlocking new things that you can use at the start of your next game; whether it be new robot heroes, a starting side-arm, or you can just start on the second or third galaxy if you’ve defeated the previous boss. It’s at this point where any frustrations of the game being hard start to melt away. If you die, you die, so what? You can start again in a completely different level to last time with a different setup.

And this, I think, is where SMAA really gets you. It’s perfect for a few minutes play; it doesn’t take long to load, and there’s even a Quick Start option on the menu. Every time you die, you see a map of the levels you cleared and on what stage you failed on. It’s not as great as the map at the end of an Outrun game, but it still helps keep that 16-bit era image alive. 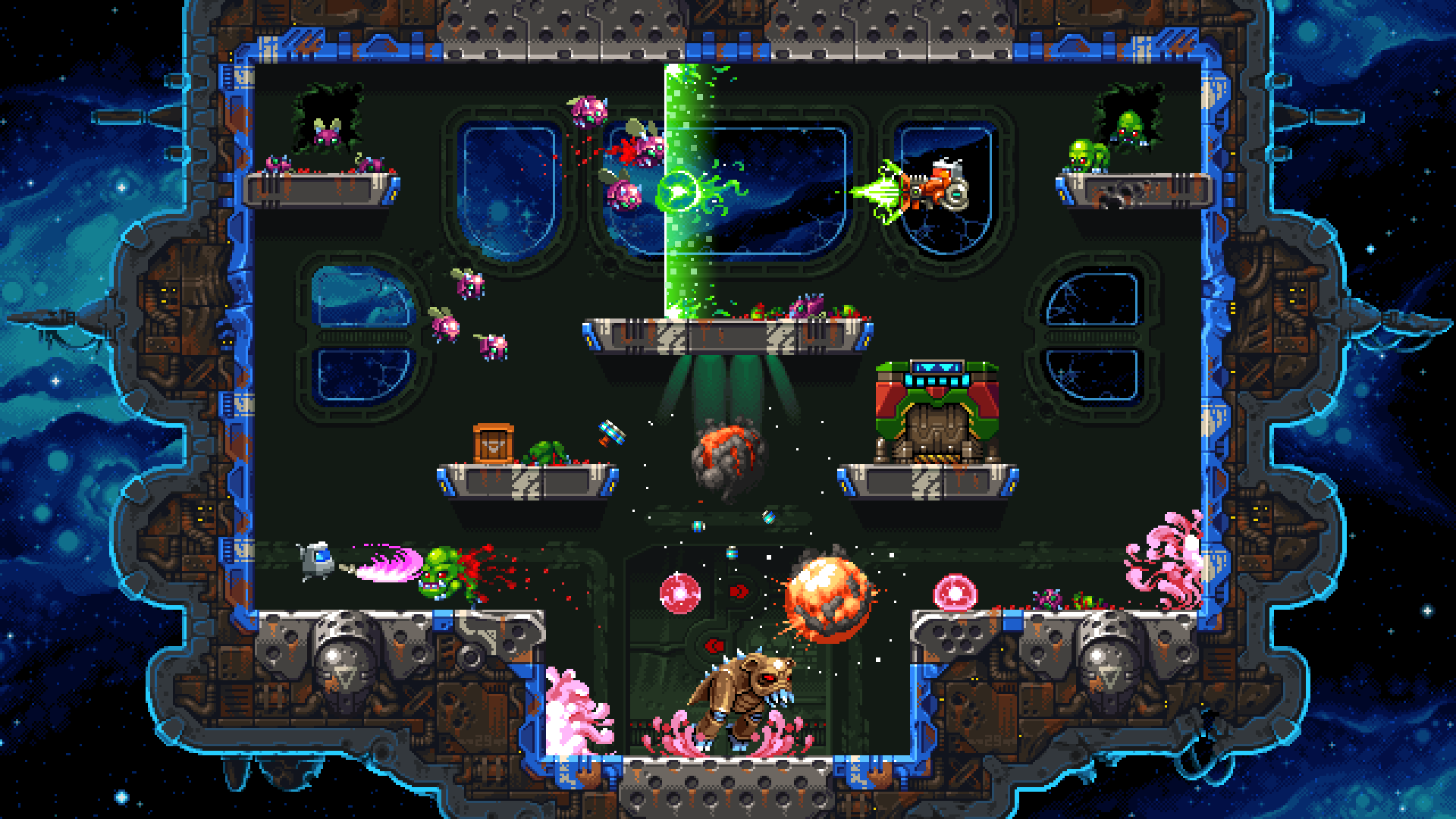 Obviously, however, we’re not still playing on antiquated machines, and that makes things all the more frustrating when the frame-rate slows towards the end of, say, a hyperdrive level. All levels take place onboard a spaceship, and when the hyperdrive goal is completed (take a tank of fuel from one end of the screen to another), the ship ‘speeds up’, and the gameplay basically takes a dive for 10-15 seconds, rendering it virtually unplayable. It’s not as if anything especially taxing is going on here, so it’s just a bit of a shame. Aside from the occasional occurrence of slowdown, the graphics are fine, they represent the targeted era well enough. As for the sound, that starts off innocently enough, but the longer you play, the music and effects start to get a bit tedious, so I spent the large majority of my time with the volume on mute.

Still, a couple of trivial points should not take away from what is essentially an absolute blast to play, even if it takes some perseverance before you get there. Due to amount of unlockables, a two-player mode, and the randomised structure of the levels, there’s a lot of fun to be had for a long time, just maybe don’t expect to want to carry on after you’ve done everything.

Thanks to Xbox & Stride PR for supporting TiX

Find us most evenings on Twitch!